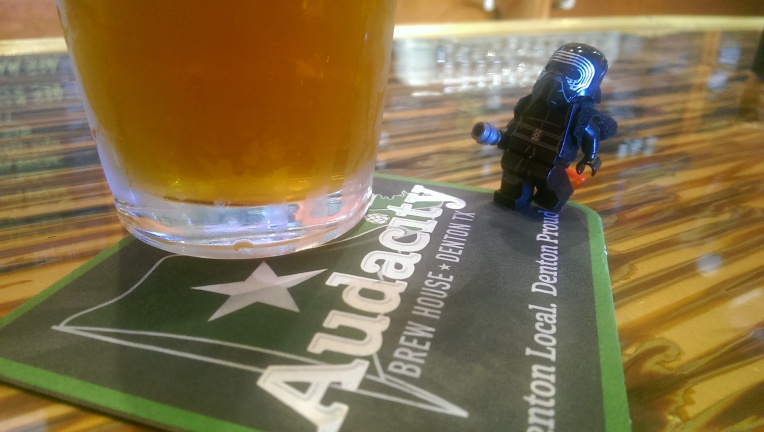 Audacity Brew House just switched to a brewpub license, allowing them to fill growlers at the taproom.

How long does it take a craft beer festival to mature? Do they grow and evolve on the same life-line as bars, pubs or microbreweries? Do they lead (or lag) the local consumer economy?

Last weekend, Dallas saw the fifth annual iteration of the Big Texas Beer Fest. It filled the cavernous Automobile Building at Fair Park as it has from the start with the spring weather cruelly perfect for a mostly indoor festival. Thousands of thirsty craft beer fans pressed into the fairgrounds Friday evening and all day Saturday, the decision made to wisely spread attendance over two sessions instead of packing more ticket holders into the same square footage.

I wandered through the wide aisles early, getting my beer bearings and warming up my palate with just a sip of Goose Island‘s Bourbon County Rare, sweet and syrupy with a deep flavor reminiscent of a classic Thomas Hardy. The growling crowd of VIPs pushed at the nylon ropes, awaiting their one hour jump on entry before general admission, and that Golden Hour can be just enough time to find some of the rare and special brews hidden among the booths that will inevitably disappear quickly. It also provides a more manageable, almost convivial experience among somewhat familiar and like-minded fans before the bulk of attendees crush in, even allowing room for a skateboarding Michael Peticolas.

In just five brief years, enthusiasts and absolute amateur fest promoters Chad and Nellie Montgomery have created what is now a Dallas craft beer institution. The Big Texas Beer Fest has become not only the largest single craft beer event in North Texas but also somewhat of a sure-bet experience, as it always concludes without significant faults or troubles and manages to provide an enjoyable experience to all attendees, from beer novice to professional drinker. 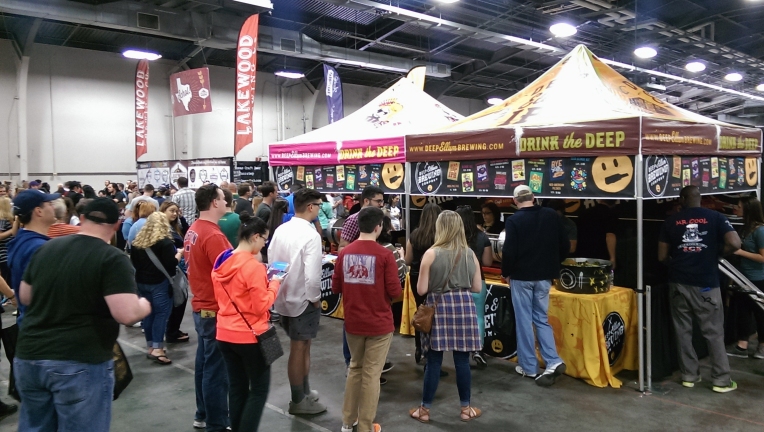 Certainly, there have been growing pains from the inception of this festival but nothing catastrophic. Ticketing and entry procedures were a big delay that first year but understandable for trying to move crowds measuring close to 5000 individuals. The air conditioning was overlooked one year and left the venue too warm, but with this particular venue and time of year that was a decision simply made too late. Water stations, ice, layout, food vendors and logistics have all been incrementally improved year after year to the benefit of attendees and representatives alike.

Small things we thought would be major headaches turned out to be nothing at all. –Nellie

This year, brewers and related vendors stretched to each end of the facility with the soundstage and bands moved to their own fenced and adjoining space outside. Early years of this festival placed them inside at the endspace of the building, dominating the limited indoor acoustics, but outside they thrive with a captive crowd surrounded by grilled aromas from circled food trucks. With the first truly great weekend weather of the year, the postcard blue sky seemed to attract as many fest-goers as did the beers inside.

Inside saw the participation of about 150 craft breweries this year, heavy on the in-state brewers and even more so for those local to North Texas. The high-traffic DFW favorites such as Deep Ellum, Peticolas, Community and Rahr & Sons anchored the larger locations at the end of the aisles, providing more access for their surging interest and demand. Lakewood used its space and this opportunity to debut their new All Call cans, a clean, lightly malted and refreshing kölsch brewed in association with the firefighters and police support organization Guns & Hoses, and which will undoubtedly become a popular best-seller. Major national microbrands were also represented, if not with a featured booth of their own then a smaller presence manned by distributors and volunteers.

Two o’clock brought the general admission ticket holders, and the comfortable crowd of VIPs surged into a sea of people, from the ordinary to the weird. Brewery tee-shirts, pretzel necklaces, beards, funny hats and even the occasional cosplay blended among the ordinary fans, casual and daily consumers now immersed in craft beer culture for a few hours. Longer lines formed for popular breweries, and sought-after specialties were greedily drained.

Instead of stocked tables uniformly staffed with reps pushing samples, many breweries embraced the evolving festival spirit by loosening their corporate collars. Shannon Brewing set up a small pub in their space, complete with video games. Franconia brought what has become their signature ice sculpture taps, chilling the beer with embedded tubing. Martin House hosted a small disk golf competition out of their booth adjacent to the obligatory blue “B” and “G” photo-troll display from the Dallas Convention and Visitors Bureau.

…even allowing room for a skateboarding Michael Peticolas.

Crowds continued to grow both inside and out in those hours after late arrival. The sea of people thickened into a dense mass on the inner aisles, with traffic snaking around queues and oblivious conversation pods and Untappd users logging beers on their phones. The buildup always peaks somewhere around the four o’clock hour, the drinking balance reached of early attendees and the spent just beginning to depart. Traditional for beer fests, a dropped sampling glass (historically glass but now plastic, for obvious reasons) elicits a roar from the crowd that propagates down the length of the building like a stadium wave. The collective effects of alcohol begin to show, mildly.

A wide variety of beers were to be found, not only wide of style and flavor but across the spectrum of quality as well. The best are obvious, as any craft beer list online can gladly recount, and the worst are discretely dumped into a nearby wash bucket. But the fun is more in the unexpected: those great beers flying under the radar, relationships revealed, gems rarely hyped or newly discovered. Bitter Sisters debuted their Winter Bush, a refreshingly plain but solid Russian imperial stout, dark and roasty without bitterness, barrel aging or liquor enhancements, wholly un-messed with. Artisanal brewer Jolly Pumpkin, known for their delicate bottle-conditioned farmhouse ales, also brews great traditional American styles under the North Peak Brewing label. And On Rotation made a very unique and tasty Jalapeño Saison infused with cucumber — it’s weird, but it works.

It was also a nice touch to include local brewpubs such as Dallas’ native Humperdinks, brewers from the local California-chain Gordon Biersch locations in Dallas and Plano, and even Irving’s Twin Peaks breastaurant (now brewing on-site), talented brewers all but of a status and caliber often overlooked or dismissed at fests such as these. Disappointly, the acclaimed Asian bistro-brewer Malai Kitchen was expected but absent, no doubt victim to a spring weekend overstuffed with competing and conflicting food-themed events around the Metroplex.

I managed to talk with Nellie briefly during the event, and asked about the most important thing she and Chad learned with now five years of craft beer festival planning under their belt. “Don’t sweat the small stuff,” she said. “Small things we thought would be major headaches turned out to be nothing at all.” SD